Every gardener needs a work station, that’s why we present our wooden potting bench that will make your gardening tasks easier. In the 3 levels you can place all kinds of small, medium or large plants, it has a functional drawer to store your tools and a side hook to hang the hose or rope. This wonderful table, in addition to being functional, will help make your garden look more elegant, orderly and beautiful. Best of all, it is made of solid and resistant wood ensuring its durability for a long time.

Benefits of our Potting bench:

• Help keep your garden or backyard clean and organized.
• It is the perfect assistant for your gardening tasks.
• Made of solid wood that is capable of holding flower pots and garden tools.
• The sink is removable, very useful for cleaning the floor; It can be used as a craft bench, potting bench, coffee bar, or outdoor bar for a patio.

Arrived securely boxed. Fit and finish are excellent; had no problem whatsoever assembling it with only a screwdriver. Finished piece looks like it would cost much more. It's gratifying to see that my labor added so much value! I'm going to fit it with a small bar sink so it can double duty as a potting bench as well as an outdoor bar.
Update: the potting bench, after taking stain and spar varnish, and equipped with a bar sink & faucet, now doubles as our patio bar! 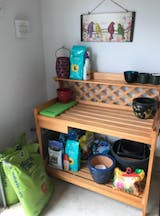 Arrived in perfect condition with ALL the screws, instructions, etc...

Easy to install and has lasted me 5 years so far. I am delighted as I have kept this out in the snow and rain a couple of years and it has held up perfectly! The only thing I added was a brass knob for the drawer to make it even more attractive! I have also used this on my terrace for serving food items at a BBQ event. One neighbor and one friend have since bought this potting bench as they thought that the item was great and the price was unbelievable for all you get. i HIGHLY recommend this potting bench !

Love this potting bench. It is exactly what I expected and fits nicely on my back porch. It was easy to assemble and everything was included and cut correctly. Personally, I think it is a great value for the money.

It is on a screened in back porch, so it will not be outdoors in the elements, so I cannot say how waterproof it is, but don't think it would last a long time outside. Since it will always be out of the weather the was not a concern I had. As far a sturdiness - it is fine for where I have it and how I will be using it. Someone placing heavy pots on the top or on the shelf might be disappointed. If you a professional or do a lot of heavy pots, etc you would want to go up a few price points. For me and my home putting around it is perfect.

I love the drawer but the open slats allow dirt to fall into the drawer. I am getting a mat to cover that area. Would rather do that than have the manufacturer place a board and increase the price. 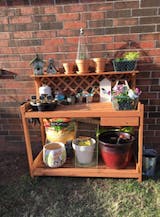 Great value for the price.

Very easy to assemble. It took about 20 minutes. No issues with alignment or hardware. One board was slightly cracked, in the area around a knot in the wood. Since I’m using this bench indoors I just let it be. Outdoors I might have glued it.

I believe reviewers who say it has a short life span outdoors. It is somewhat lightweight for an outdoor item. Indoors, or in greenhouse, it’s robust enough for many seasons.

The glue is somewhat roughly applied. If you want to apply varnishes, stains or other finishes, some sanding might be needed.

I’m using mine as a painting (the art kind) station. I faux finished it to look more like a pickled wood. It’s amazing for so little cash!

A
A.
Best Potting Bench; a Great Value !!

THIS POTTING BENCH IS A GREAT VALUE!!

I've purchased and assembled many pieces of knocked-down items for use around the home yet, I was extremely impressed with the quality of the materials and hardware that are included with this potting bench. For example, I found no damaged components while assembling this bench; there was no missing hardware; all of the hardware appeared to be of high quality, that is, none of the heads of the screws or bolts felt as if they wanted to shear off under torque. Moreover, ALL of the pre-drilled holes lined up perfectly which is a significant departure from most other pieces of knocked-down products. The potting bench was sent to NJ from a warehouse in Kentucky. It arrived quickly and was packaged and protected very professionally. Although the assembly directions had no words, the pictorials were more than self-explanatory. The completed potting bench is exactly as shown on the website, it's sturdy, and the clear protective finish is very obvious. The potting bench was placed in our back yard. I will be purchasing a retro glass drawer pull for the one drawer. I may also add a stop for the drawer. Again, a great buy!

Follow-Up to my review......
I had intended to add a cover over the drawer to keep rain water and potting debris from falling through the slats into the drawer; I've now completed that cover (see photo). Using 1/4" pre-sanded plywood, I measured and fabricated the cover to fit the length and width of the drawer beneath the slats. Using #8 x 3/8 flat head philips wood screws, I drilled pilot holes and then secured the cover to the slats being careful not to interfere with existing hardware or, the drawer itself. I then applied a coat of marine varnish to the cover.

I also added a retro steel drawer pull (not glass) nickel plated, to match the tool hooks at the side of the bench. All that remains now is installing a drawer stop to prevent the drawer from being pulled all the way out and falling. I'll first have to turn the bench on it's side in order to access the underside to install the stop.

2nd Follow-Up;
Update: Some rain water was still able to collect in the drawer despite the cover. Potting soil, however, does not fall into the drawer through the slats since I installed the cover. Securing an inside drawer Stop was not possible with the drawer in place. I did, however, fabricate a Stop, securing it to the exterior side of the drawer, permitting it to strike the RH leg of the bench, preventing the drawer from falling out. I first screwed a flat 'L' shaped corner brace to a block of wood (see photo) and then, screwed the brace directly to the side of the drawer. (I located the Stop several inches from the back of the drawer.)